Three past and one newly elected president at the Beatenberg meeting 2008. 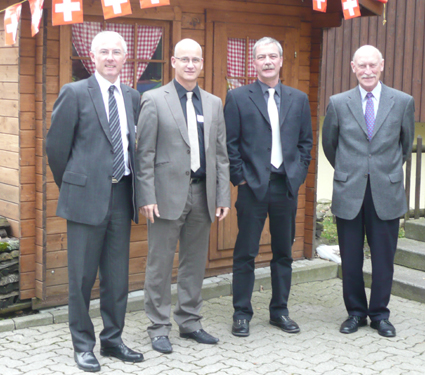 The four last presidents during the 35th SGMS meeting in 2017 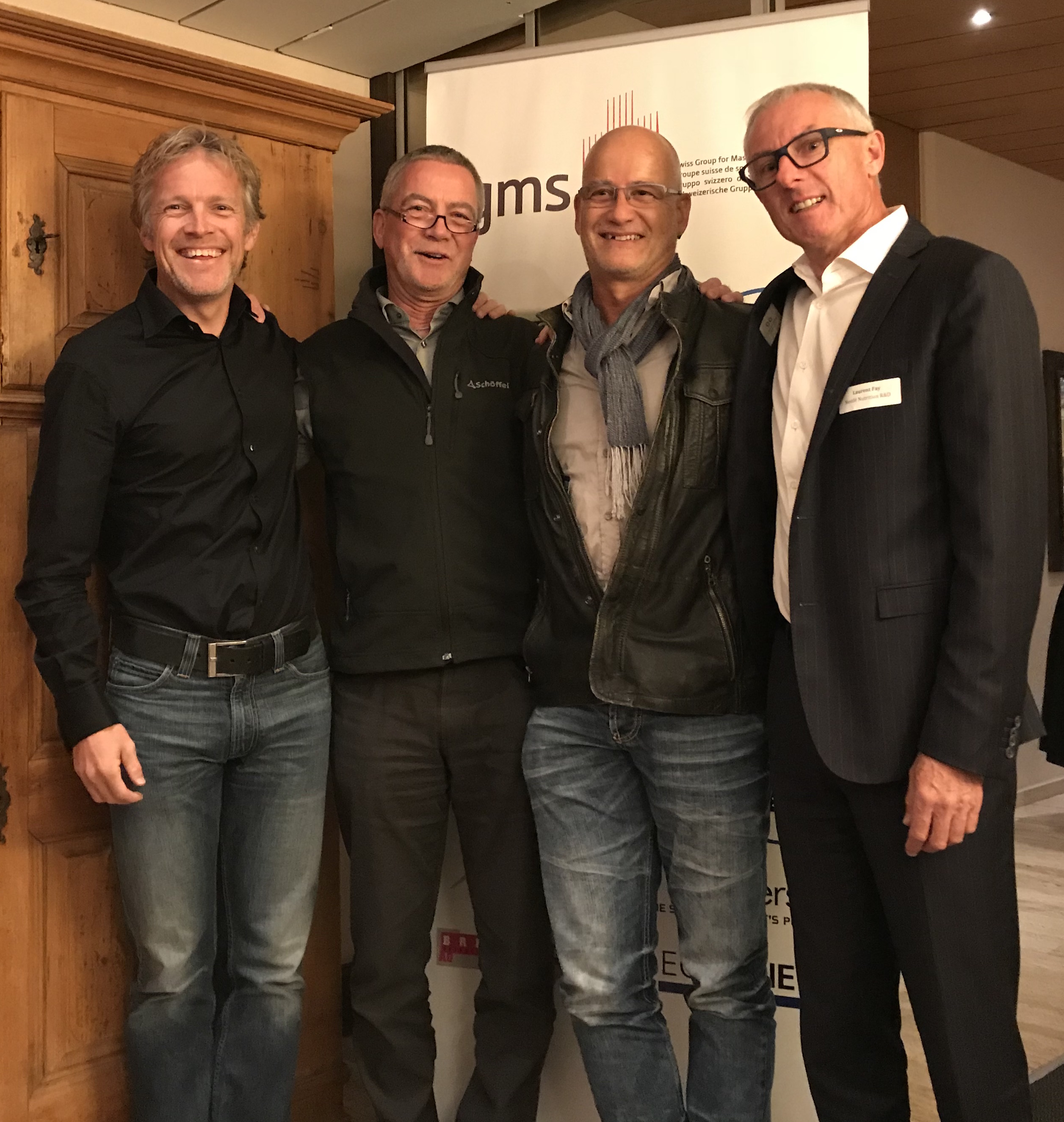 A list of all current and former board members can be found at the bottom of this page.

The Story of the SGMS

The formation of the Swiss Group for Mass Spectrometry (SGMS) dates back to the early 1980s. In November 1981, Dr. Hubert Milon, working at the Nestlé Research Center in Orbe (Switzerland), proposed to "form a group which would permit an exchange of experience and ideas when facing a technical problem, when confronted with the need to purchasing a new instrument, or implementing a new technique". Thus, the incentive to form the SGMS was the creation of an informal association, with a very broad range of applications. The founding document was signed by Prof. H. Brandenberger, Prof. A. Buchs, Prof. W. Richter, Dr. B. Willhalm and Dr. H. Milon.

One year later, on September 17, 1982, the first general assembly of this new society was held at Prof. Urs Schlunegger's laboratory in the Institute of Organic Chemistry of the University of Bern. The 35 participants consolidated the first statutes of the SGMS and elected the first committee, with Dr. Hubert Milon as president, Prof. Urs Schlunegger as vice president, Prof. W. Richter in the role of the treasurer, and Drs. L. Rivier, and P. Weibel as auditors. Further members of the committee were Profs. H. Brandenberger and A. Buchs as well as Dr. B. Willhalm.

An initial problem of the SGMS may not be obvious to the foreign reader: the language. Switzerland knows four official languages: German, French, Italian and Romantsch, a local language. Members of the new society came from various countries, and - naturally - not everybody understood each other's language. Thus, English was chosen as the official language for the meetings of the SGMS. Accordingly, the very first "SGMS Newsletter", which was to appear two to three times per year from 1983 onwards, was published in English. Nevertheless, already in 1983 the statutes of the SGMS appeared in French and German translations, and at the same time the name of the society was fixed in four languages. The official logo of the SGMS was created in 1991.

A point that tends to raise a smile with most SGMS members is the annual meeting and its location. While the American and the German mass spectrometry society tend to come together at changing places, until 1999 the SGMS had a fixed spot for its assembly on the Rigi Mountain, situated high above Lake Lucerne in the heart of Switzerland. Since the very first assembly on 21/22 October 1983, the meeting is known as "The Rigi-meeting". A special detail of this location was that access to the hotel is possible only either by gondola or by cable car. Together with the fact that the participants live almost two days close together in the same area, a familiar atmosphere is perceived. This may be the reason why, in spite of the sometimes unstable economical situation of the local hotels, there seemed to be no way to move the participants away from there. However, the first exception occurred in 1992 for the 10-year jubilee, which was held at the Ecole Polytechnique Fédérale in Lausanne (EPFL). Headed by its president Dr. Stahl, the meeting lasted three days and included invited lecturers as well as corporate exhibits. In contrast to this, the "normal" Rigi meeting is generally scheduled for a duration of 1 1/2 days. It always includes three to four invited plenary lecturers, a number of short presentations, and the annual general assembly.

Since 2000 the "Rigi meeting" was held twice at the Hotel Chaumont et Golf (also reached by cable car) with a beautiful view of the lake Neuchâtel, and from then on at the Hotel Dorint in Beatenberg, overlooking Lake Thun. In 2002 we celebrated our 20-year anniversary and in 2007 our 25th anniversary.

Acknowledgement: Special thanks go to Dr. H. Milon and A. Weibel for many anecdotes and their help in compiling the brief, but colourful history of the SGMS.

* honorary members of the SGMS